* In case of any delay in receiving the OTP, you may verify it later. Please proceed without verification.

Your mobile number is not registered with us. Please register your mobile no.

Enter your City name or Pincode 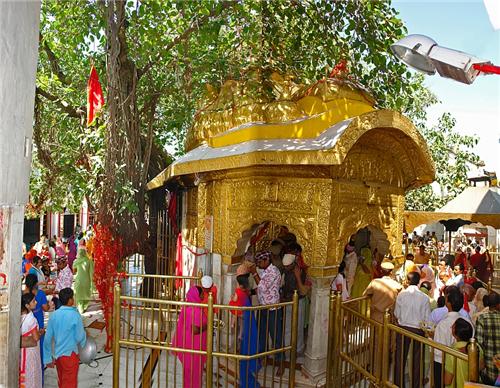 The Mata Chintpurni Devi Temple is one of the primary religious spots in the Una and is situated on the main national highway which connects Dharamshala and Hoshiarpur on top of the majestic mountains of the Sola – Singhi mountain range. Designated as one of the seven major Shakti Peethas out of a total of fifty one Shakti Peethas, the Mata Chintpurni Devi Temple is one of the oldest temples where resides the deity of Maa Bhagwati Chinamasta Devi. The temple is at a distance of about 22 kilometres from Gagret and at an elevation of around 950 meters that can be roughly translated to 3117 feet above the sea level.

According to the legend prescribed in the Markandeye Puran which is considered to be one of the holiest books of the Sanatan Dharma, Goddess Chandi who is also known as Goddess Bhagwati had a fierce battle with the demons (the asuras) in which she fought bravely and slayed all of them. However, even after the battle was over, two of her ‘Sahyogini’ (companion) emanations named Jaya and Vijaya were not satisfied and were thirsty for more blood. These companions had helped the Goddess during the battle, had killed many asuras and had drunk their blood. In order to quench the thirst of her sahyoginis, Goddess Chandi cut off her own head and gave her blood for them to drink. Since then, this incarnation of Goddess Bhagwati is known as Mata Chhinnamasta where ‘çhhinna’ means without and ‘Masta’ means head. Hence, Chhinamasta is taken to be as the severed headed one. 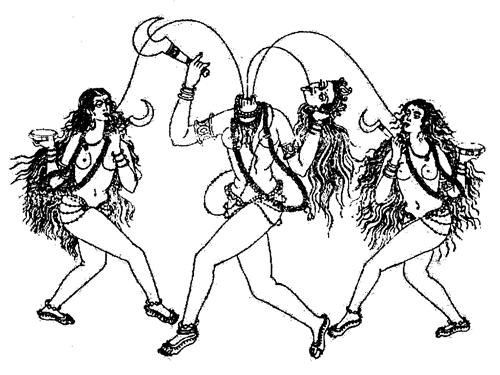 Source: chintpurni.angelfire.com
The depiction of Mata Chhinnamasta in popular folklore is usually expressed through a painting of the Goddess whereby she is seen holding her own cleaved head in one hand and drinking from the stream of blood that is spouting from the dismembered arteries of her neck.  Her two companions or sahyoginis can also be seen at her two sides whereby they are completely naked as well as quenching their thirst by drinking from the rivers of blood flowing from her cut arteries.

This headless Goddess, Chhinnamasta is regarded and revered as the great cosmic power who, through her actions, is able to help the saints and the ascetics to free their mind making it completely devoid of any preconceived notions, ideas, attachments and habits and transcending into the space of the pure divine consciousness. The very act of cutting off the head from the body by the Goddess is a symbolic gesture of separating the mind from the body and freeing the consciousness from the shackles of the material confinements of the physical body.

Another popular tale revolving around the Mata Chintpurni Temple is that it is considered to be the place where Goddess Sati’s forehead had fallen down when Lord Vishnu had cut up Sati’s dead body into fifty one pieces in order to calm down the grief and anger of Lord Shiva upon his wife’s death and to stop his ‘tandava’ that was wreaking havoc all over the world. Hence, this temple site is regarded as one of the most important ‘Shakti Peethas’ among the others in the Indian subcontinent.

The Shrine of the Mata Chintpurni Temple

The structure of the temple of Mata Chintpurni Devi itself has been built by using stones. This single storeyed building has a flat base in the shape of a square and a dome in the centre of the roof. With a north facing entrance, an old banyan tree on an elevated platform stands as a guard at the entry to the temple along with statues of Lord Ganesha and Lord Hanuman which are placed on the opposite side of the banyan tree. The entry to the temple is also decorated with several brass bells which are hung high in the corridor just inside the doorway. 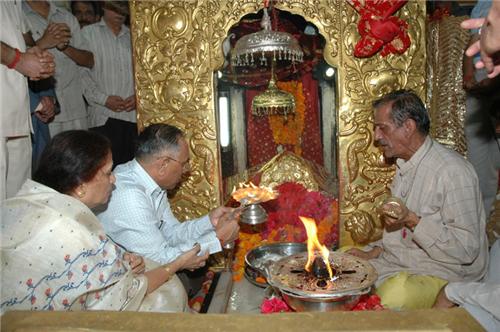 Upon entering the temple, pilgrims have to enter into the next room where there is the garbha griha. Devotees will come across the idol/image of Mata Chintpurni Devi which is also known as the ‘pindi’ (or the round stone). The statue is placed upon a palanquin of white marble and the priests who pray and worship the deity sit beside it. The roof of the Mata Chintpurni Temple is decorated with carved out stone images of Lord Bhairon and Lord Hanuman. Some additional rooms and balconies have also been constructed in the southern and western portions of the temple whereby they serve as the living quarters of the temple trust officials, the priests and the devotees at the time of fairs and festivals.

A huge banyan tree is also located inside the premises of the temple whereby the first hair cutting ceremony for the children which is also known as the ‘mundan’ ceremony is performed regularly. The devotees visiting the temple bring various offerings with them in order to worship the deity which include various types of sweets, coconut, betel nuts, a red cloth called a chunni and a small red flag. The long stairway and the pathway leading to the temple has been built upon the orders of a man called Diwan Dina Nath, who was a nobleman in Maharaja Ranjit Singh’s court. A deep water tank surrounded by platforms is located at the north of the Mata Chintpurni Temple at a distance of around 440 yards down the hill. A dip in the water tank is considered to be holy and is observed by several devotees visiting the temple. 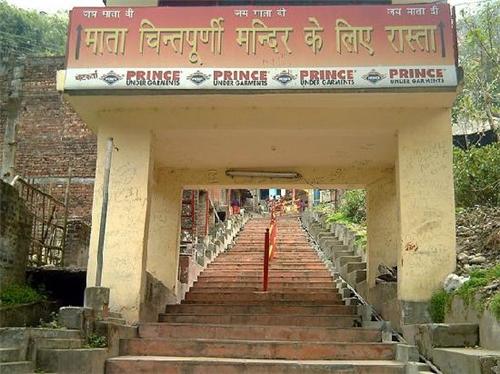 The general timings of the temple is from 4 AM to 11 PM every day. During the summer season, the Mata Chintpurni Temple is open from 4 AM to 11 PM and the temple is open from 5:30 AM to 10:30 PM during the winter season. The morning Aarti takes place at 6:00 AM every day and the evening Aarti takes place at 8:00 PM every day. The Temple closes for a short duration during the times of the Aarti and in the afternoon for half an hour as well.

Legend of the Mata Chintpurni Temple

According to popular folk legends, a Brahmin priest called Pandit Mai Das had established the temple at this site. It has been said that one day, Mai Das, who belonged to the village Ripoh Muchilian in the Amb tehsil, was going to visit his parents-in-law in the village Pirthipur. The village Chintpurni was on his way and when he was passing by this place, he heard some beautiful devotional music coming from the peak of the hill. Upon reaching there, Mai Das became highly curious about the source of the music and climbed up the hillock to see a lovely girl of about 12-13 years of age sitting along with a lion by her side and surrounded by several gods who were humming spiritual songs in praise of her.

Panditji was amazed as well as quite terrified to see the glow and the celestial light coming from the girl. He was about to leave when the girl came up to him and revealed that she was actually Goddess Durga. She told him that she was highly pleased with him and asked him to not be afraid of her at all. She further told him that she would like to stay in the village Chintpurni permanently in the form of a stone ‘pindi’ and asked Panditji and his successors to worship the ‘pindi’ twice a day revering it as her own incarnation. In addition to this, she declared that any person who visited the temple and worshipped the deity with utmost sincerity and devotion would be free from all materialistic tensions and anxieties. Henceforth, the Goddess would be known as ‘Chintan Purni Devi’ (the Goddess who relieves one of all worries). 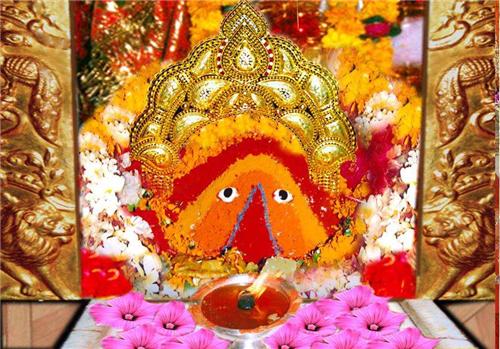 Hearing all this, Panditji regarded the Goddess with folded hands and told her that he did not have any child and although he had no issues with setting up a temple on that site, however, that hillock had no signs of any water and hence could not support any habitation. The Goddess smiled upon his words and blessed him saying that he would have a son who would succeed him. She further instructed him to a place at a little distance away where he would find a slab of stone a foot long, underneath which he would find water. Obeying her orders, Pandit Mai Das discovered the water under the slab, brought that slab and kept it near the ‘pindi’. He then bathed the ‘pindi’ and worshipped it according to the instructions of the Goddess. The next morning, however, he left the site of the temple and continued his journey onward to his parents-in-law’s place but he could not continue his journey for long as he lost his eyesight.

Coming across a passer-by on his way, he narrated his whole experience with the Goddess and felt remorseful about the fact that he had disobeyed the Goddess and had left the site of the temple breaking his promise of worshipping the Goddess every day. Consequently, the Goddess had punished him and had taken away his eyesight. Feeling sorry for Panditji, the passer-by took him back to the site of the ‘pindi’, who, after he asked for forgiveness from the Goddess, was given back his eyesight. Pandit Mai Das then built a small hut over the stone ‘pindi’ and started living there and worshipping the deity twice daily. As time passed, the small hut developed into a large village and a large number of devotees came to the temple to pay their respects to the Goddess. Till this day, the successors of Panditji continue to live in the village of Chintpurni as the official priests of the temple and worship the Goddess every day.

Fairs and Festivals at the Mata Chintpurni Temple

All throughout the year, a number of fairs and festivals are celebrated in the temple premises of the Mata Chintpurni Temple. The most popular fairs are organized during the days of Navaratri and Saawan in the months of Ashad (July), Ashwin (October) and Chaitra (March-April). These fairs are also known as ‘Mata da Mela’ (Fair of the Mother Goddess) and are held for nine days during the Navaratras and on the first ten days of shukla paksha i.e. the bright half of the lunar month in Saawan. The fairs are residential in nature and continue for whole days and nights whereby the crowds are most during the 8th day of the fair. The auspicious days like Poornima, Sankranti and Ashtami are also celebrated with much pomp and show at this temple. 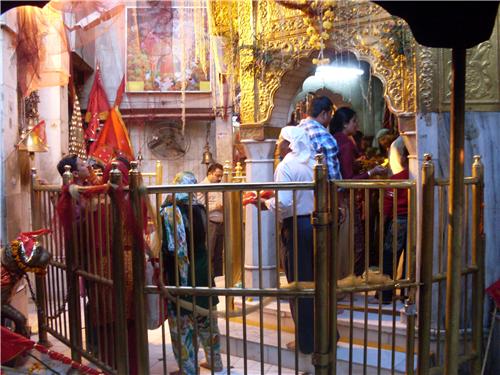 The fairs at this temple were usually organized by the District Board of Hoshiarpur till the year 1961. However, the mantle was soon taken over by the Panchayat Samiti of the Amb village by August 1962 who took over the management of the fair. The management was again passed on to Chintpurni Temple Trust on 12 June 1987 who have been organizing these fairs ever since along with the Deputy Commissioner of Una and the SDM of Amb who act as the Commissioner and the Assistant Commissioner respectively.

The Mata Chintpurni Devi Temple in Himachal Pradesh is well connected by a good network of roadways. Since it is at a mere distance of 22 kilometres from Gagret, people can rent vehicles and travel to the temple by a half an hour – 35 minute journey. However, private vehicles are not allowed to travel beyond the Chintpurni Bus Stand except for extreme circumstances and which is at a distance of 1.5 kilometres from the temple. Devotees and pilgrims have to walk the rest of the distance up to the temple through a gently inclined roadway and through the local market place.

Are you a Business Owner?

Add the products or services you offer